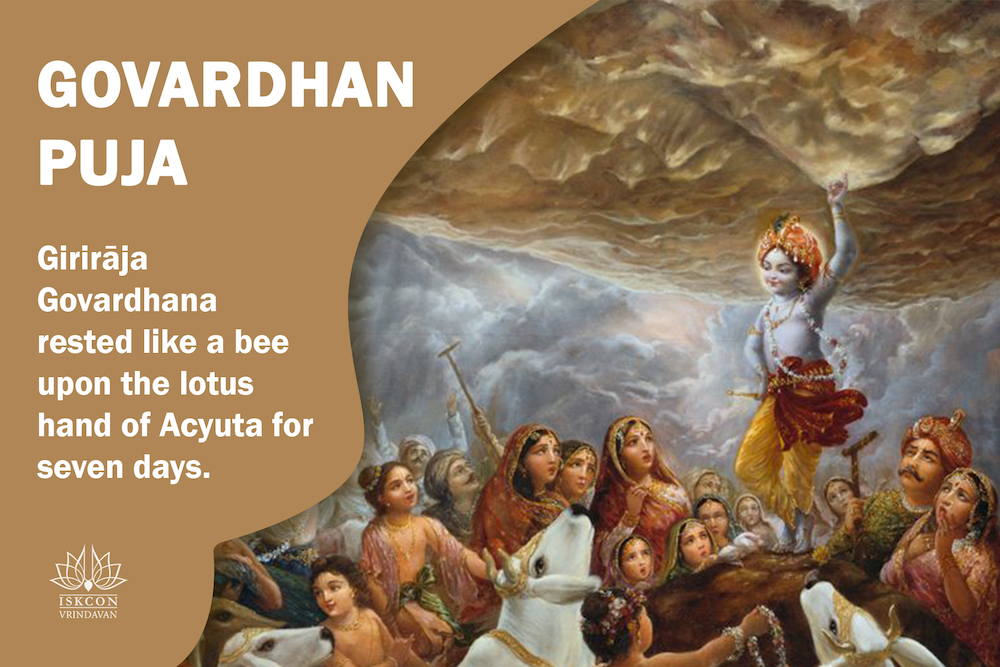 All glories to the emperor of all the principal mountains, ÅšrÄ« GirirÄja-Govardhana, who is exalted in all splendor; who the gopÄ«s proclaim to be haridÄsa-varya, the best servant of ÅšrÄ« Hari; whose worship was introduced by ÅšrÄ« Ká¹›á¹£á¹‡a when the Lord stopped the sacrifice for worshiping Indra, and who then received the good fortune of resting continuously on ÅšrÄ« Ká¹›á¹£á¹‡aâ€™s lotus hand for one whole week.

Govardhan puja, one of the biggest festivals in the month of Kartik, observed on Shukla paksha pratipad, is celebrated with great jubilation in Shri Krishna Balaram mandir in Shridham Vrindavan. In the morning on this auspicious day, the Utsav vigraha of Krishna Balaram are taken to goshala where the cows are worshiped with great respect. Being the eternal servitors of Shri Krishna, who is a cowherd boy, all the devotees take great pleasure in feeding the cows and caressing them. Thereafter the cows and Giri govardhan are glorified in the peaceful atmosphere of the goshala amidst the mowing of the cows and bulls. Following the class, all the devotees return to the temple, where the whole temple resounds with hari naam sankirtan as all the assembled devotees take darshan of the splendid Abhishek ceremony of Giriraj. Being bathed with panchamrita, and a radiant big smile playing on his divine lips, Giriraj glances upon all the vaishnavas with lotus like eyes brimming with mercy and robs all the devotees of their hearts with his charming countenance. Proceeding the Abhishek, Giriraj maharaj is seated on the Govardhan hill prepared with halwa, and reigning the hearts of the devotees form his high seat on the hill, he appears most attractive and wonderful. The magnificent hill upon which he pleasurably sits is prepared by many devotees artistically decorating the hill with numerous sweets and other bhoga preparations, and with their love filled hearts they beautifully manifest the different pastime places of the lord on the hill like radha kund, shyam kund and various other lilasthalis where the lord enacted various splendid lilas with his cowherd friends and the gopis. Many other devotees engage themselves for many days before the festival in preparing various delicious beautifully presented and mouth-watering delicacies to decorate the hill. In this way, Giriraj maharaj gives all the devotees an opportunity to serve him and become the recipients of his mercy. Indeed as sadhakas it is of utmost importance for us to receive the mercy of the devotees of the Lord (gopÄ«-bhartuá¸¥ pada-kamalayor dÄsa-dÄsÄnudÄsaá¸¥), and Shrimati Radhika has herself proclaimed Giriraj maharaj to be the best of the vaishnavas(haridÄsa-varya), therefore it is our true good fortune to be able to engage ourselves in the service of Giriraj maharaj, and we pray to him to give us a particle of his mercy so that we shall be able to serve Shri Shri Sadha Shyamsundar in their lilas.

The glories of Govardhan are endless and the importance of his worship was established by Krishna himself in the most amazing pastime. Once when the vrijavasis were preparing for the yajna to be performed for the pleasure of lord Indra, to appease him and be blessed with sufficient rain, the young prince of Vraja, the very life and soul of all the vrajvasis, Nandanandan Shyamsyndar questioned the ritual and proclaimed that the worship of lord Indra was unnecessary as it was his responsibility to provide the required amount of rain to all the inhabitants of the world. Instead they should worship mother cow and Giriraj govardhan, as they are truly the sustainers of all the cowherds in Vrindavan. Upon hearing this, all the residents of Vrindavan headed by Nanda Maharaj agreed to take the advice of Krishna, and they all started gathering innumerable food items to offer to Giriraj maharaj. They then assembled in front of the hill and performed puja to mother cow and Govardhan hill and offered all the bhoga to him. Thereafter they circumambulated the hill and experienced great jubilation in celebrating the festival. However, Indra was greatly enraged by this and immediately he ordered his Samvartaka clouds to go and devastate entire Vraj and inundate it with water. The wrath of lord Indra struck fear in the hearts of the vrajvasis and therefore they took shelter of Krishna and prayed to him to protect them from the torrents of rain being sent by Indra. Seeing the plee of the vrajavasis Krishna immediately lifted Govardhan hill and held it up for seven days, providing all the residents of Vraja protection from the downpour. Thereafter, when Indra saw the supernatural potency of the young boy, he could understand that he was the Supreme Personality of Godhead and therefore came and asked for forgiveness, offering many prayers in glorification and bathing the Lord with the milk of Surabhi cow and water from Akash ganga, thus forming the beautiful lake named Govinda kund. In this way Shri Krishna himself established the worship of Giriraj maharaj.

On this day, we pray to Giriraj that one day we may be able to serve the divine couple when they sport in the various grooves on his hilltops, which are full with water falls and pristine lakes with blooming lotuses, the aroma of which attract numerous honey bees to them, fruit orchards which satisfy the cowherd friends of Shri Krishna and provide nectarian honey dripping from the branches, minerals with which they decorate themselves and beautiful caves for the pranay keli, of Shri Shri Radha Shyamsundar.

GirirÄja Govardhana rested like a bee upon the lotus hand of Acyuta for seven days. He expertly serves ÅšrÄ« Hari and ÅšrÄ« Hariâ€™s dear associates by providing them with fruits, roots, and caves. I bow my head and offer praá¹‡Äma unto that Govardhana Hill.