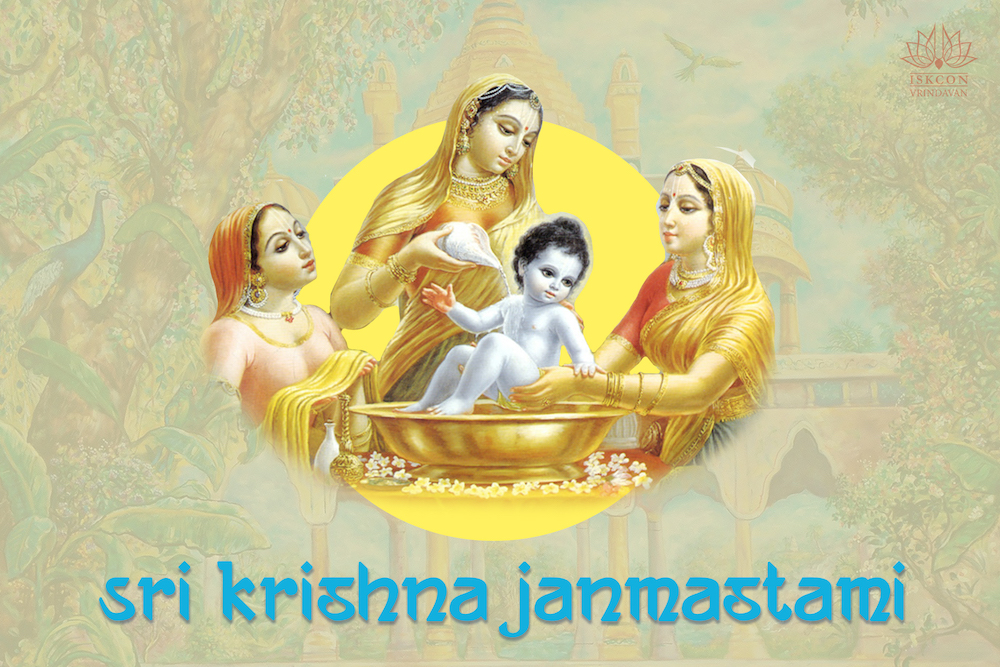 Krishna, who is known as Govinda, is the Supreme Godhead. He has an eternal blissful spiritual body. He is the origin of all. He has no other origin and He is the prime cause of all causes.

The Supreme Personality of Godhead, the cause of all causes and the Lord of all the manifest and unmanifest universes, Shyamsundar, is eternally residing in his spiritual abode of Golok Vrindavan along with all his associates, enjoying nectarian transcendental pastimes in the various mellows of dasya, sakhya, vatsalya and madhurya. Through his Maya shakti, he causes the creation, maintenance and destruction of all the material universes, but he himself remains unaffected and independent of this external energy of his, eternally performing manohar lilas, which steal the hearts of the great Yogis and Rishis, who are completely unattached to the material world and the objects of the senses, and instead are only concerned with pleasing the senses of the most charming Lord Shri Krishna, whose three fold bending posture, tribhang, broad chest, slender waist, lips as red as the bimba fruit playing a mischievous smile, lotus petal like eyes moving restlessly with amorous desire, and ears adorned with makara earings, have completely enchanted their minds. Madanmohan, (the enchanter of cupid), when standing under the kadamba tree on the banks of the river Yamuna, the waves of which are most cooling and the breeze blowing over the waves carries the sweet scent of the lotus flowers blooming in the her waters, places his flute upon his reddish lips and plays an enchanting melody, all the residents of Vraja, and all the animals in the forests of Vrindavan, become stunned with wonder and listen intently to the transcendental sound vibration emanating from Krishnaâ€™s dear companion, the flute. In this way He is eternally present in his transcendental abode enjoying transcendental mellows with his eternal associates such as Nanda, Yashoda, the cowherd boys and the gopis.

However, due to his compassionate nature the Supreme Lord in his original form with all of his potencies and partial manifestations descends to this material world once in a day of Brahma to annihilate the miscreants, deliver the devotees and reestablish the principles of religion.

In order to deliver the pious and to annihilate the miscreants, as well as to reestablish the principles of religion, I advent Myself millennium after millennium.

When Swayam Bhagwan Vrajendranandan Shri Krishna descends on this planet he appears with all his eternal associates and with his eternal abode, Shri Vraja mandala, with the main purpose to bestow his mercy upon his dear devotees by giving them his direct darshan and to attract all the other living entities to him by performing divine enchanting pastimes, so that being attracted by them the jivas may take up Krishna consciousness and go back home back to godhead. This has been explained by Srila Bhaktivinod thakur,

O Gopinatha, You are the ocean of mercy. Having come into this phenomenal world, You expand Your divine pastimes for the sake of the fallen souls.

To this end, although he is unborn and eternal, the supreme lord appears in this world on the auspicious eighth day of the dark fortnight in the month of Bhadrapada, during the auspicious Rohini nakshatra, when all the stars were in auspicious constellations, a sweet scent permeated the atmosphere and the entire universe sanctified in the welcome of the Shyamsundar.

This glorious day is therefore celebrated by all the Vaishnavas with great enthusiasm as it is the day when the lord of their lives purified this earth by his appearance, in a most attractive form of a bluish baby as soft as butter tinged with musk. Keeping the same spirit, this festival is celebrated in Iskcon Vrindavan, Krishna Balaram mandir, with great pomp and show.

After taking darshan of the lords with a new outfit both at the time of Mangal arati and Darshan arati, when the lords are dressed in a beautiful outfit and decorated with various splendid ornaments and fragrant flowers, oozing nectar from every pore of their transcendental forms which submerges the devotees in an ocean of bliss, the devotees start engaging in speaking and hearing the glories of Giridhari, the lifter of the Govardhan hill. After the glorification, all the devotees engage all their time and energy in the service of the lord in various ways, till 10â€™o clock at night when they all assemble for the gorgeous Abhishek ceremony of the deities of Krishna Balaram and Radha Shyamsundar. The Abhishek which is accompanied by the heartfelt singing of the Holy Names by all the devotees, is followed by an elaborate bhoga offering comprising of an unending variety of delicacies. At midnight, the lords are offered an Arati, witnessing which fills the hearts of all the onlookers with immense pleasure and a feeling of relief from the miseries of material existence. This is followed by ekadashi prashad for all the devotees, who had been fasting the whole day and engaging only in service.

The festivities, however, continue the next day, when Nandotsav is celebrated and all the devotees perform various services for the pleasure of the lord and a huge feast is offered to the Deities, which is then honored by all the devotees with great relish to their hearts content.