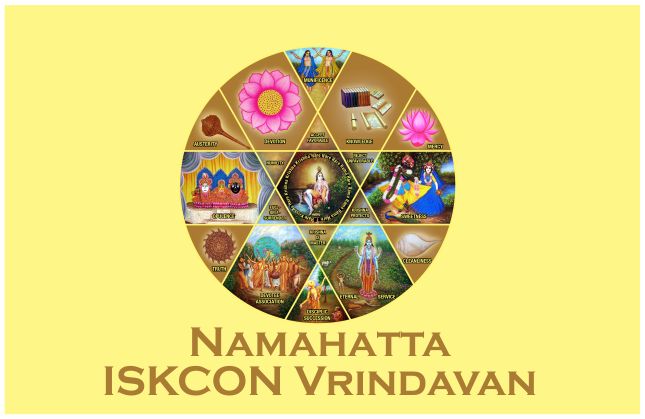 â€œO hear Me, hear Me Nityananda! Hear Me Haridasa! Simply disseminate My order everywhere. Go from house to house and beg [the residents as follows]: â€˜Speak about Krsna, worship Krsna and teach [others] about Krsna.â€™â€

Over 100 years ago, the great Acharya Srila Bhaktivinoda Thakura, in the line Gaudiya Vaishnavasim, again took up the preaching mission of the Lord Caitanya and recorded the following words in reference to the Nama-hatta preaching work:

â€œI am singing news of the greatest happiness! At the place known as Surabhi Kunja in Shri Navadvipa, the Marketplace of the Holy Name has now been opened-and Lord Nityananda Himself is the Proprietor.â€ [Vaisnava-Siddhanta-Mala]

Bhaktivinoda Thakura â€“ the Innovator of the Marketplace

Srila Bhaktivinoda Thakura personally travelled to so many places and established over 500 Nama-hatta sanghas. He organised roles for running the Nama-hatta smoothly. Each Nama-hatta was headed by a commander who took care of the members of the Nama-hatta. He designated the travelling preachers who went from door to door as salesmen. Finally, he considered himself simply as the sweeper whose purpose was to help maintain purity by speaking Harikatha and singing kirtans at the houses he visited.

Srila Bhaktivinoda Thakuraâ€™s modern-day Nama-hatta mission continued with Srila Prabhupada, the founder of the International Society for Krishna Consciousness (ISKCON), His disciples including HH Jayapataka Swami (Minister for Congregational Preaching), HH Bhakti Raghava Maharaja, HH Bhakti Purushottama Swami, and HH Gauranga Prem Swami have expanded these Nama-hatta by the thousands throughout West Bengal, Bihar, and Orissa. This enthusiasm has rippled out and initiated thousands of more Nama-hattas all over the world.

The above is taken from https://iskconcongregation.com/programs/creating-markets-of-the-holy-name

Preaching is the Essence; Purity is the Force.

Utility is the principle; Books are the Basis.

In order to fulfil the desire of Srila Prabhupada and the dream of Srila Bhaktivinod Thakur, Nama-hatta department, at ISKCON Krishna Balaram Mandir, facilitates numerous preaching programmes as below:

For more details on the above activities and how to participate in them please contact: