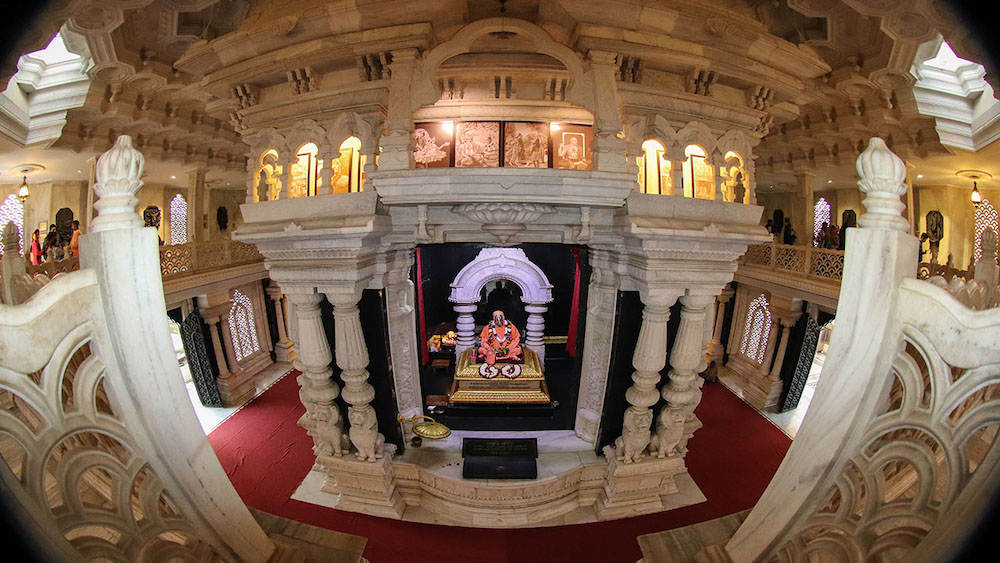 Srila A.C. Bhaktivedanta Swami Prabhupada, the Founder Acharya of the world famous spiritual organisation known as ISKCON (the International Society for Krishna Consciousness) left this mortal world on 14thÂ November 1977 at 7.25 pm at his home in the sacred land of Vrindavan. He was surrounded by his loving disciples who were chanting the Hare Krishna Mahamantra, which Srila Prabhupada had taken to every town and village of the world on behalf of his spiritual master, Srila Bhaktisiddhanta Saraswati Thakur, and Caitanya Mahaprabhu.

Srila Prabhupadaâ€™s most significant contributions, perhaps, are his books. He authored over 70 volumes on the Krishna Bhakti, which are highly respected by scholars for their authority, depth, fidelity to the tradition, and clarity. Several of his works are used as textbooks in numerous college courses. His writings have been translated into 76 languages. His most prominent works include:Â Bhagavad-Gita As It Is, the 30-volumeÂ Shrimad-Bhagavatam, and the 17-volumeÂ Shri Caitanya-Charitamrita.

For millennia the teachings and the rich culture of Sanatan Dharma especially Bhakti-yoga, or Krishna Consciousness, had been hidden within the borders of India. Today, millions around the globe express their gratitude to Srila Prabhupada for revealing the timeless wisdom of Bhakti to the world.

As per the Vedic tradition, being a Sannyasi, Srila Prabhupadaâ€™s divine body was placed into the ground and his disciples constructed a magnificent carved white marble Samadhi Mandir in his honour in front of his beloved Krishna Balarama Mandir. His handsome merciful Deity sits larger than life on the altar, and huge bronze bas-reliefs of His Divine Graceâ€™s lifetime activities and mission stand behind the altar on the marble parikrama wall backside.

Upstairs, there are beautiful dioramas of him representing the Samsara Prayers we sing in every temple around the world. During the day, the devotees conduct a Japa chanting program for visitors upstairs and Kirtan downstairs.

Facing the Samadhi Mandir, connected by an overhead marble bridge, is an equally gorgeous white carved Samadhi Museum, with diorama displays downstairs. The hall is meant for educational use and distribution of his transcendental literature. Upstairs there is a wonderful photo essay timeline of Srila Prabhupadaâ€™s lifetime activities and mission, Parampara Deities, and a display of all of his books in all languages.Â  During the day, videos are played on a small screen upstairs in the back, and in the evening, a cinema quality projector shows Srila Prabhupadaâ€™s larger than life activities on the large silver screen for all who exit the temple.

The large worshipable Deity of His Divine Grace on the Samadhi altar was made by his disciple Jagannath Krishna das from Texas, and the dioramas, Parampara Deities, and brass-reliefs by his disciple Bhaktisiddhanta das, who now lives and serves in Mayapur.

Srila Prabhupada is sitting in his divine Samadhi to reciprocate with you in your direct service to him. Our debt to Srila Prabhupada can never be repaid for uplifting the world to Krishna consciousness.Â  In gratitude for his compassion, let us fully cooperate together to maintain and protect his eternal Samadhi in Vrindavan to assure it will survive the onslaught of time. Dedicated devotees in Vrindavan are engaged in daily maintenance and upkeep of the building, exhibits, gardens, and altar.

Service Opportunities for All

For the maintenance of Srila Prabhupadaâ€™s Samadhi and his museum to the highest standards, numerous works are continuously carried out, as below. You are invited to generously contribute to these important areas of upkeep.